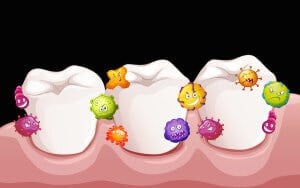 Bleeding gums and bad breath can be much more than embarrassing inconveniences; they're warning signs that you are on the road toward periodontal disease. Consider them some of the red flags indicating your teeth need a professional dose of TLC to get back on the right track. Periodontal disease is another word for gum disease, which starts when stubborn plaque isn’t removed despite brushing and flossing. When the plaque is not removed, it develops into tartar, which can only be removed through the skills of a dental hygienist. The bacteria in tartar and plaque can cause a gum inflammation called gingivitis, which causes bleeding and red gums. The good news is that gingivitis can be reversed by daily and diligent brushing, flossing and regular dental checkups. The bad news? If gingivitis is not treated, it can get worse, eventually becoming periodontitis.

In periodontitis, the gums pull away from the teeth, creating small pockets that trap bacteria and become infected. If not treated, the infection damages gums, tissue and the supporting bone structure of the teeth—causing them to loosen and eventually have to be removed. Symptoms of periodontitis include:

How To Avoid Periodontal Disease

Do you have any of the following risk factors? If so, be sure to follow-up with a dentist to assess your risk for periodontal disease.

Remember, if your gums bleed regularly when flossing or brushing, or if you have any of the warning signs listed above, schedule an appointment with your dentist as soon as possible. There are effective treatments for gum disease. Often this involves a deep cleaning called “scaling and root planning” where the dentist removes plaque and tartar that have developed under the gum line. Once removed, the tissue has time to heal.